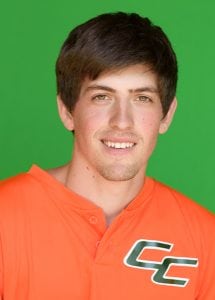 Nate Trueblood has played baseball for most of his life. In his Little League years, he played all positions of the field. Nate is left handed though so he was depressingly restricted to just a few positions later in his career. He was later mainly used as a pitcher but also played in the outfield and first base.

Nate played for Blaine High School and then after every high school season was over he would go up to Canada and finish the second half of the PBL season with White Rock. Nate finished his baseball career pitching for Clark College in Vancouver, Washington.

One of Nate’s greatest highlights in the sport is getting 49 strikeouts in 33 innings in one of his seasons in the PBL. Others include the Mal Walton award and getting a no-decision 10 inning no-hitter for Blaine High School.

Nate also works at Inside Pitch so he is constantly surrounded by the sport. He has helped out with numerous baseball and fastpitch teams. Being a pitcher, he understands what all positions must do to be successful.

In his free time, Nate enjoys kayaking in the bay, hiking, and pretty much any field game or grueling activity. He is easy-going but has a very competitive side and doesn’t mess around when it comes to sports. Nate tries to improve himself every day to be the best at what he likes to do.